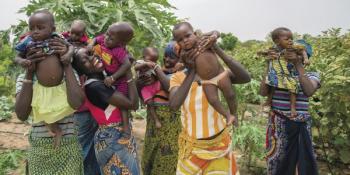 Bringing electricity to developing countries is about much more than powering lights and charging cellphones. Energy can have a profound effect on residents’ health and economic well-being.

During a recent visit to rural Benin, Bob Freling could see how his charity’s solar-electrification work directly benefited the villagers.

"I saw a complete transformation. The women farmers had filled out, and the children, who used to be malnourished, looked really healthy," says Mr. Freling, executive director of the Solar Electric Light Fund, or SELF.

The charity, which brings solar power to developing countries, launched an effort in 2006 to electrify 44 villages in Northeast Benin, inhabited by more than 100,000 people. But SELF’s work has done more than just power villages far from the electrical grid.

Thanks to a partnership with an expert in drip irrigation, SELF has brought what it calls the Solar Market Garden to West Africa. While traditional drip-irrigation systems typically rely on diesel generators, SELF’s cheaper and more sustainable version harnesses the sun. Results in two pilot villages, says Mr. Freling, are astonishing.

"This is an area with an extraordinarily long dry season, and suddenly people are able to grow leafy green vegetables year round," says Mr. Freling. In addition to providing villagers with a reliable food source, the Market Garden enables villagers to earn significant income. "It uplifted the whole village."

The project has been extended to 10 more Benin villages and to two remote areas of Haiti. But Mr. Freling doesn’t want to stop there. He’s convinced there is unlimited demand for a model that harnesses the power of the sun to address access to clean energy, water, and food, not to mention climate-change adaptation and women’s empowerment.

Now SELF hopes to take advantage of plummeting solar costs and growing awareness of the importance of access to power to expand the project significantly. That intent is in line with a United Nations goal of achieving universal energy access by 2030.

"There are currently 1.2 billion people without access to energy," says Mr. Freling. "My hope is that all sorts of groups will join forces and that more foundations and corporations will step up because they see that this mission has enormous potential."

The Solar Electric Light Fund has an annual budget of $4.5 million. Half comes from foundation support and donations from individuals; the remainder from government support, international institutions, and corporations.

You can visit original article at:  http://philanthropy.com/article/Bringing-Solar-Power-to-Poor/149163/