Post by Caroline Bermudez and Megan O'Neil on Tuesday, 23 September 2014 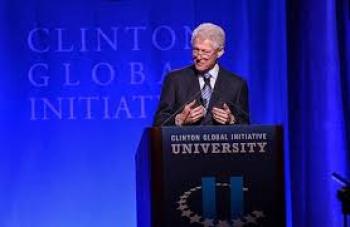 The Clinton Global Initiative, Bill Clinton's annual philanthropy summit, held in New York, runs through Wednesday. The meeting has become a popular gathering for heads of state, business leaders, and celebrities and typically draws billions of dollars in philanthropic gifts and other charitable commitments.

This year’s featured speakers include the actor Matt Damon, representing the charity he co-founded, Water.org; Laurent Lamothe, prime minister of Haiti; and Judith Rodin, president of the Rockefeller Foundation.

Since it was established in 2005, the Clinton Global Initiative has drawn more 180 world leaders and more than 2,900 commitments worth an estimated $103-billion.

The meeting is live streaming its sessions, which you can watch below on this page, along with a running feed of announcements and select Tweets from the event.

The original story can be found at:  http://philanthropy.com/article/Pledges-Roll-In-as-Clinton/148959/