The cure for cancer that parents wonât use 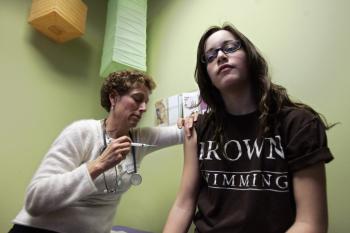 Meredith Wadman is an Eric and Wendy Schmidt Fellow at the New America Foundation. She is writing a book on vaccine history.

Not so long ago, when my sons still had smooth cheeks and children’s voices, I had them vaccinated against human papillomavirus, the most common sexually transmitted disease. It was late 2011, and the Centers for Disease Control and Prevention had just recommended that boys join girls in being vaccinated at age 11 or 12. I was certainly receptive: HPV, as it’s commonly called, causes cervical cancer, cancer of the tonsils, cancer of the back of the tongue and, less often, cancers of the vulva, vagina, anus and penis. It seemed important to ensure that my kids were protected.

Yet numbers released last month by the CDC show that my sons, now 14 and 15, are among a small minority of adolescent males who have been vaccinated. In 2013, just 14 percent of American boys ages 13 to 17 had received all three recommended doses of the HPV vaccine. (The CDC also recommends “catch-up” vaccination for males up to age 21.)

Not that parents are rushing to have their girls vaccinated either, even though the CDC first recommended the vaccine for prepubescent girls in 2007 and virtually all insurers pay for it. In 2013, fewer than 38 percent of American girls between 13 and 17 had received the full three-dose course.

It is heartbreaking to watch a safe, effective vaccine go unused. Consider this: The CDC estimates that increasing the vaccination rate of American girls to 80 percent would prevent 53,000 cervical cancers during the lifetimes of girls who are now 12 and younger.

When I had my sons vaccinated, it was partly with girls in mind. After all, if fewer young men are infected, fewer young women will be exposed to the virus that causes cervical cancer — currently the most common cancer prevented by the vaccine. But now I am realizing that HPV poses a growing risk to boys.

A new breed of cancer of the back of the tongue and tonsils, caused by HPV, is rising in incidence — likely caused, researchers suspect, by increases in premarital sex and oral sex over the past several decades. These cancers afflict men far more often than women, and at relatively younger ages than do other head and neck cancers, which typically appear in men older than 60. Middle-aged men who don’t die from their HPV-linked cancer often must live for years with the side effects of intensive chemotherapy and radiation delivered to the back of the throat. These can include the permanent inability to swallow and the appearance later of ew,n aggressive, radiation-induced cancers.

If this trend continues, we are going to see more cancer of the back of the tongue and the tonsils caused by HPV. One recent analysis of 30 studies, conducted by University of Wisconsin researchers, found that the proportion of such cancers caused by HPV rose from 21 percent before 1990 to 65 percent after 2000. Anil Chaturvedi of the National Cancer Institute and his colleagues have estimated, based on recent trends, that by 2020 there will be more new cases of these HPV-induced throat cancers in the United States each year than new cervical cancer cases.

Many parents don’t like to think of their 11- and 12-year-olds as sexual creatures. Ironically, the CDC recommendation assumes not that kids are sexually active at this tender age but rather that they are not: The point of vaccination is to close the door before the horse is out of the barn.

It’s no use telling yourself that your child isn’t “that kind” of kid. The fact is, HPV is so common that almost all sexually active adults are infected at some point. Last year, the CDC estimated that about 79 million Americans were infected, most of them in their late teens and early 20s.

Most people who get HPV have a transient infection that their immune system clears with no lasting damage. But in some people, the virus takes up residence and goes on to cause cancer. I am grateful that, thanks to the HPV vaccine, I will never have to find out if my sons fell into that second, unlucky group.