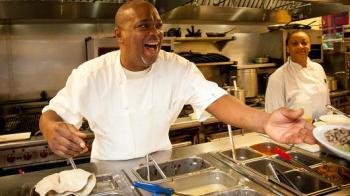 Being in the hospitality business comes with some responsibility, according to restaurateur Steve Cook.

"If you wake up every day and provide hospitality, you have to believe it and not fake it," said Cook, the co-owner of CookNSolo Restaurants, a Philadelphia restaurant group that includes Federal Donuts and Zahav.

"You have to mean it. If we're really in the hospitality business, we should be willing to extend that level of hospitality to everybody, whether or not they're paying for it."

And how do you show you mean it? In Cook's case, you open a nonprofit restaurant, Rooster Soup Company.

The idea for Rooster Soup was hatched after CookNSolo opened its fourth Federal Donuts chicken restaurant in Philadelphia. With the new location, which was larger than its others, the company started using whole chickens and that caused more waste from the trimmed birds, including backs and bones.

CookNSolo originally planned to use the leftover chicken bits to make soup to bring to Broad Street Ministry, a nonprofit that uses "radical hospitality" to feed and help the disadvantaged, said Bill Golderer, Broad Street's pastor. But Golderer thought they could do something even greater, and the owners of CookNSolo agreed.

The idea was this: The unused chicken bones and parts from Federal Donuts would be used to make stock for Rooster Soup Co.'s soup at no cost, thus increasing margins. The profits from the restaurant would be directed to Broad Street, which feeds the hungry of Philadelphia.

"This idea was sort of germinating as we were getting to know the Broad Street Ministry in Philadelphia, and it felt like putting those two things together, an organization that was coming up with a new way to provide hospitality to people in our city who weren't likely to receive it, along with what to do with our excess product from Federal Donuts, just came together to make something magical," Cook said.

Further proving the concept's success is The King's Kitchen, an acclaimed restaurant from Charlotte, North Carolina, that has been serving up what Charlotte Magazine once declared was the best southern food in the city, while also helping out disadvantaged locals since 2010.

All of The King's Kitchen's profits go toward its mission. The restaurant not only feeds the hungry, but also uses what it calls the "King's Kitchen Restoration Program," a five-part training program that employs, trains and ministers to the homeless, the poor, troubled youth, rehab graduates and others.