El Día La Raza: What happened to the indigenous race? 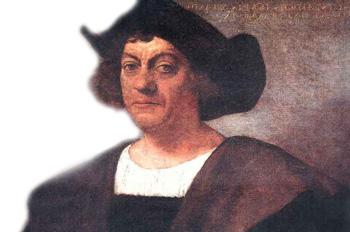 When César Chávez was asked what he thought about the term la raza, he answered the question with a question, asking, what was wrong with the indigenous race?

The word raza was popularized by José Vasconselos who in 1925 wrote an essay titled “La Raza Cósmica” (The Cosmic Race). Vasconcelos was an intellectual and intellectuals at the time took it to mean that Latin American was comprised of races from all over the world, and that the mixture had produced a new people who would transcend the "old world".

But, as in the case of all words, meanings are distorted when they are not defined or put into context. In the case of la raza, it was given a bad name by some Latin Americans and Spaniards who wanted to play down the animosity of many Latin Americans toward Spain and the conquest. These leaders took to celebrating Columbus Day, October 12, as the day of the “discovery” of the Americas and the mixing of the races that included Spaniards.

Without any context, El Día de la Raza validates and accepts the argument that the indigenous peoples were fortunate to have been “discovered”, and receiving the blessing of Jesus Christ. Moreover, they argued the Indian benefitted from Spanish culture.  But, history is about the truth, and the celebration of a manufactured holiday doesn’t make it so.

It is offensive to mark Columbus Day as a federal holiday. It is also offensive when classroom teachers try to impress their students with stories of the Nina, Pinta and the Santa María.

Some cities will even hold Columbus Day parades with Italians, Jews and Spaniards fighting for a piece of Columbus. For some of us, it is as offensive as celebrating Hitler’s birthday, which as far as I know, no sane group in the United States wants to claim. 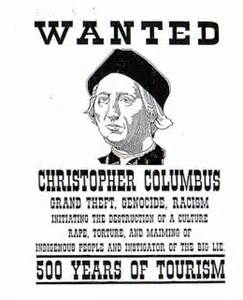 Debunking the Columbus Myth is difficult because it has become legend, and it is part of our shared memory. Moreover, people want to believe it. They want the holiday, and the manufactured truth that makes Columbus an American hero. It is part of a Eurocentric worldview that reinforces feelings of American and European exceptionalism.

The truth be told, Columbus was not a great man. In his early career, he was conversant with the African slave trade of the Mediterranean and Atlantic Islands off the shores of Spain and North Africa that made huge profits. Columbus took these memories and their lessons with him to the Caribbean.

His voyages were for profit ventures; by contract he was entitled to 10 percent of the profits.  Upon first encountering the indigenous peoples, Columbus wrote in his journal on October 12, 1492: "They should be good servants .... I, our Lord being pleased, will take hence, at the time of my departure, six natives for your Highnesses." When he arrived in Spain, the natives were paraded through the streets of Barcelona and Seville.

On his second voyage, Columbus sent back Indians to be sold as slaves. In 1493 Columbus wrote to the Spanish Crowns: “"their Highnesses may see that I shall give them as much gold as they need .... and slaves as many as they shall order to be shipped." Indeed, hundreds of Indians were shipped during Columbus’ voyages, and in 1505 Columbus' son Diego became an African slave trader.

Quoting from Whitney DeWitt, “The Indians that were not exported were put into slavery on the island. There was literally no way to escape some form of enslavement. Columbus would let the settlers of his establishment choose whomever they wanted for their own. One account claims that each settler had slaves to work for them, dogs to hunt for them, and beautiful women to warm their beds. This degradation of an entire group of people seemed not to bother Columbus or the Spaniards in any way. They appeared to consider it their right as superiors.” 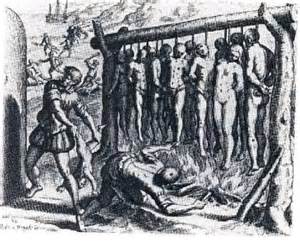 The devastation was horrific. In 1492, the population on the island of Hispaniola (Haiti and the Dominican Republic) was estimated at above 3 million. Within 20 years it was reduced to only 60,000, and within 50 years, not a single original native inhabitant was left.

This opened the door for the African slave trade. The great majority of African slaves went to sugar colonies in the Caribbean and Brazil. It is estimated that 12.5 million Africans were shipped to the New World, with about 10.7 million surviving the voyages. About 600,000 slaves were imported into the U.S., and at least 200,000 African slaves were imported to Mexico, which is significant considering that by the 17th century, the population of New Spain  once 25/28 million, dropped to less than a million natives, and no more than 250,000 Spaniards migrated to what is now Mexico during the entire colonial period. 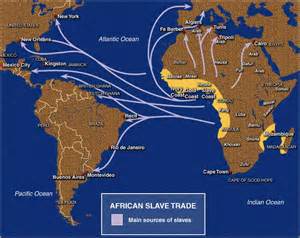 African slaves did not compromise the major source of forced labor in New Spain; the Indians were also made slaves and performed most of the forced labor in the fields, mines and other projects.

The truth be told, Mexicans are still suffering the devastation and the racism caused by Columbus. The legacy of Columbus’ “discovery” can today be seen in the streets of Mexico City where little children sell gum for handouts, and poverty is almost solely represented by los de abajo of the castas.

Anyone who has any sense of justice or history knows that the ancestors of these children built great civilizations with cities larger than those of contemporary Europe. They had books that the sons of Columbus destroyed; they had an advanced mathematical system, calendars, architecture, agriculture, and a defined cosmology. They were destroyed by the children of Columbus, who reduced the natives to selling gum.

Celebrating El Día de la Raza is not an innocuous act. Holidays are important in forming approved memories. Identity is formed by culture that in turn shapes our behavior, beliefs and cultural narratives. Holidays are part of our memory and form our narratives.  Popular events such as holidays are sanctioned by society, and they act as a form of social control that help maintain a social order and a popular consensus. It is in this context that terms such as el día de la raza are important because they avoid the need for providing a historical context, and thus absolve the Europeans for their sins.

I have been criticized for referring to what happened to the indigenous peoples as genocide. Critics say that I am engaging in hyperbole. Many repeat the cliché that after all it happened in the past. It the process it short circuits our long-term memory. 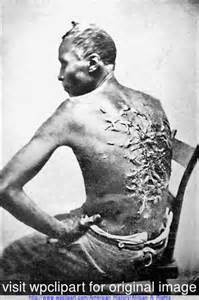 The reality is that Columbus Day denies and minimizes the brutality of the Spanish Conquest, and the violent deaths of tens of millions of natives throughout the Americas. Some experts estimate that there were 100 million Indians in the Americas; this number fell to about 10 million. It denies the brutality and inhumanity of the African slave trade.

The acceptance of Columbus Day elevates Columbus to a position of honor. And that is offensive. Whether we like it or not el día de la raza imputes meanings, and gives credibility to the myth that Columbus discovered the Americas when the reality is as Jalil Sued-Badillo says, “Christopher Columbus has the distinction of being the first to introduce that new order to America.”

I am not a proponent of collective guilt. But, at the same time, it is important to answer César’s question, what was wrong with the indigenous race? 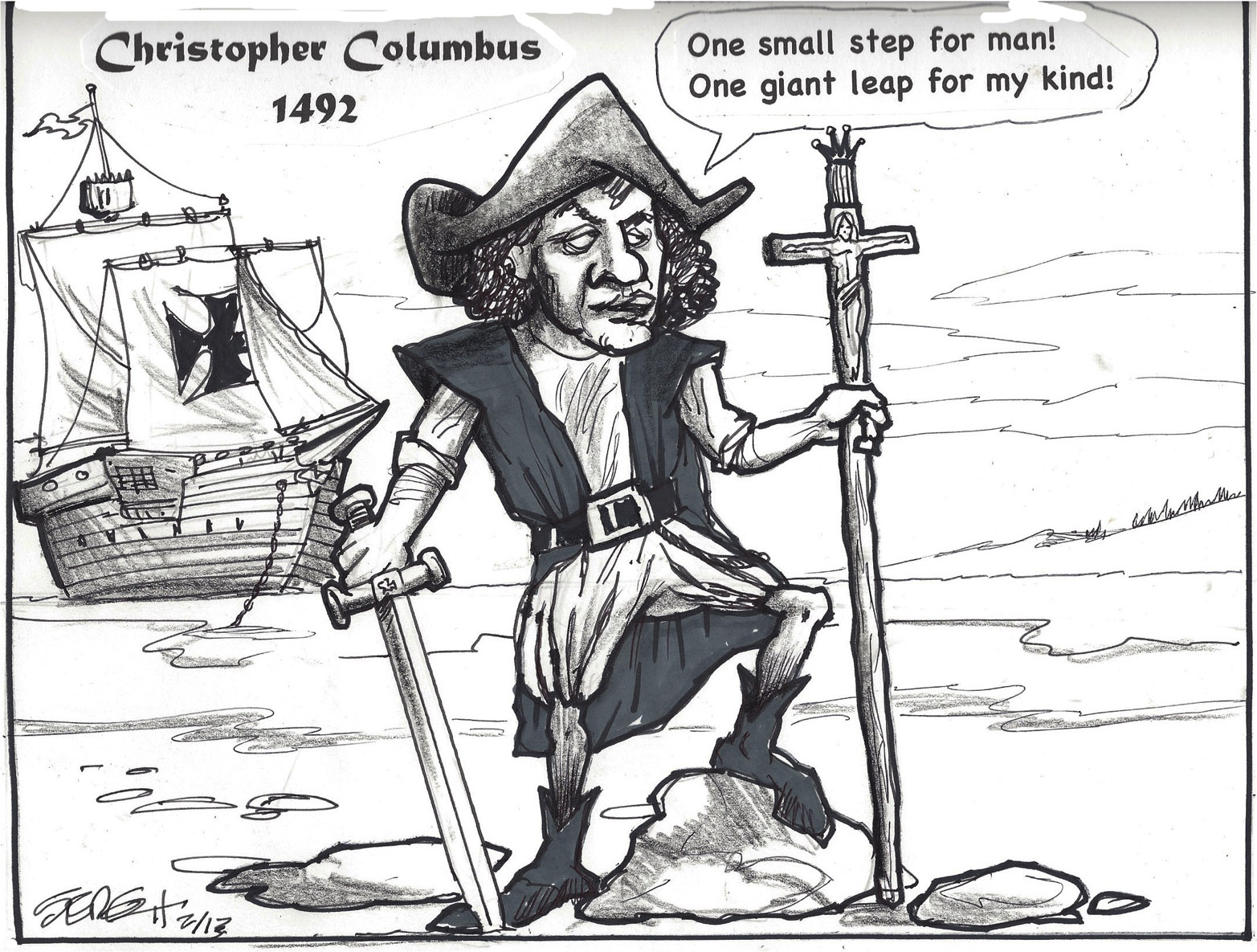 Special thanks to Sergio Hernández for his caricature of Columbus, Sergio is a great artist and political cartoonist.

For those who have an extra $5 a month for scholarship, the For Chicana/o Studies Foundation was started with money awarded to Rudy Acuña as a result of his successful lawsuit against the University of California at Santa Barbara. The Foundation has given over $60,000 to plaintiffs filing discrimination suits against other universities. However, in the last half dozen years it has shifted its focus, and it has awarded 7-10 scholarships for $750 per award on an annual basis to Chicana/o and Latina/o students at California State University-Northridge (CSUN). The For Chicana/o Studies Foundation is a 501(c) (3) Foundation and all donations are deductible. Although many of its board members are associated with Chicana/o Studies, it is not part of the department. All monies generated go to fund these scholarships.

We know that times are hard. Lump sum donations can be sent to For Chicana Chicano Studies Foundation, 11222 Canby Ave., Northridge, Ca. 91326 or through PayPal below. You can reach us at forchs@earthlink.net. Click on to http://forchicanachicanostudies.wikispaces.com/ and make a donation. You may also elect to send $5.00, $10.00 or $25.00 monthly. For your convenience and privacy you may donate via PayPal. The important thing is not the donation, but your continued involvement.