TUSD has yet to remedy its disgraceful history of segregation

Post by Sylvia A. Campoy and Rubin Salter Jr. on Wednesday, 20 February 2013 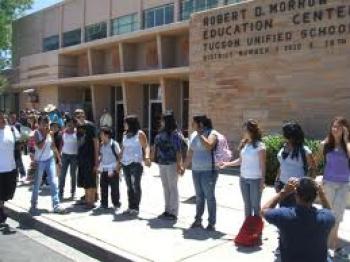 The wistful piece "Deseg order is holding TUSD back" (Jan. 27) laments the U.S. District Court's continued oversight of the school district and points to the many ways in which the court is involved in the operation of our region's largest school district. It suggests that this oversight inhibits the district's success and contributes to a decline in enrollment and to the increase of children who are impoverished living within the district's boundaries.

The piece overlooks the obvious and casts inappropriate culpability for the protracted oversight and other problems endemic to TUSD on the federal court or the case plaintiffs. The obvious truth is that TUSD has a reprehensible history of segregating the delivery of education to the detriment of African-American and Mexican-American children. This is the segregation that was proved to exist some 34 years ago, and it is the reason for the court's original findings and orders. Unfortunately, TUSD has not remedied the invidious effects of this segregation despite the substantial time that has passed and the tax dollars that have been expended.

This conclusion was clearly reflected by the U.S. Court of Appeals' most recent comprehensive review of the matter when it determined that the release of TUSD from the desegregation order was premature when viewed in light of the substantial evidence proving ongoing violations or noncompliance by TUSD. This point escaped the attention of the author of the Star's article. The district has simply failed to honor the requirement to integrate our schools and to remedy the deleterious effects of its apartheid educational system.

As for the contention that the desegregation order has become the tail wagging the dog, vestiges of segregation will not be eliminated if TUSD does not purposefully consider integration as a critical factor in developing a credible process for school closures and boundary changes. The Star's piece might have better understood and pointed out how school closures and boundary changes are intimately tied to the integration of TUSD.

TUSD's failure to honor its legal (and moral) commitment in the desegregation case is mirrored in its other failings identified in the piece (student achievement, student enrollment, etc.). These systemic failings can each be traced in part to long-standing administrative neglect and lack of administrative vision for the district's children. Unfortunately, the incomplete or inadequate efforts of TUSD in connection with federal District Court requirements have been accompanied by many other failings in other endeavors by its current and past administrations.

In closing, it may be most appropriate for TUSD to utilize its desegregation plan as its strategic focus. Sound policies and practices that better serve all students will be undertaken. Based on the district's past historical shortcomings in multiple areas, successful implementation will more likely be realized under the court's watchful eye of Special Master Hawley.

We will all celebrate as a healthier and better-educated community when TUSD completes the requirements to be granted unitary status and demonstrates that it no longer requires judicial supervision.

Sylvia A. Campoy has served as a Mendoza plaintiffs' representative for nine years, but has been involved with the desegregation case, in various capacities, since its outset. Email her at sylviacampoy@live.com Rubin Salter Jr. has served as legal counsel for the Fisher party since 1976, when he was approached by the NAACP president and asked to act as lead attorney. Email him at rsjr3@aol.com