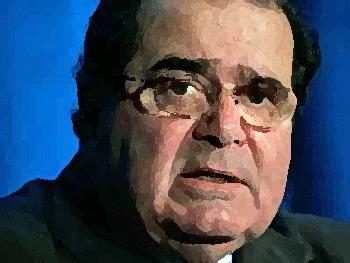 In the latest example of how the distemper of the right infects the rule of law in America, and why President Obama would enhance his legacy by moving to fill ALL federal judicial vacancies within 60 days, Supreme Court Justice Antonin Scalia has reiterated his opinion that the Constitution is not a living document that should reflect the lessons of history but is, instead, a stale document that is (in his words) “dead, dead, dead.”

This radical notion of the law, which is held by many federal judges appointed by previous presidents, would turn back the clock against two hundred years of American experience and jurisprudence.

If Scalia had served when Theodore Roosevelt was inaugurated as president, he would have presumably argued that if former vice presidential nominee Sarah Palin and Sen. Kelly Ayotte (R-N.H.) had lived then, they, along with all women, could be constitutionally denied the right to vote. It is ironic that so many others in those days, who were long ago discredited by the high court of history, agreed with Scalia’s view, which is why it took the suffragettes to lead the fight to win the vote. Scalia’s legal opposition today to the rights of women at work will be equally discredited by the high court of future historians.

If Scalia had served on the court when President Dwight Eisenhower was inaugurated, his “dead” Constitution theory would have presumably led him to rule that Sen. Marco Rubio (R-Fla.) and Supreme Court Justice Clarence Thomas could have been forced by racist jurisdictions to attend segregated schools when they were students. If Scalia’s “dead” Constitution theory had prevailed in 1954, instead of being rejected by a unanimous Supreme Court, this evil could still exist today, because Brown v. Board of Education would have been decided differently.

Recently, Judge David Sentelle, writing for the D.C. Circuit Court of Appeals (which has several vacancies) — in a decision that I believe will be reversed on appeal — violated judicial precedent by limiting presidential appointment authority. Sentelle included in his opinion the breathtakingly false statement that the president sought authority to make appointments while senators eat lunch.

This stunning example of judicial distemper and contempt for facts reveals how some “conservative” judicial opining may be appropriate for partisan talk radio, but is grossly inappropriate for those empowered with life tenure to impartially adjudicate the law.

If Sentelle had opined in his bar exam that a president sought to make appointments while senators ate lunch, he would probably not be practicing law today, let alone deciding it.

The theory of law based on an allegedly dead Constitution often includes a denial of precedent and misrepresentation of fact analogous to the denial of the science and evidence of climate change. Sadly, misguided politicians can lose elections, but federal judges are granted tenure for life.

Before the Citizens United decision, Justices Scalia and Thomas had private meetings with parties having great interests in the case (so much for ethical standards about apparent conflicts of interest) before ruling in their favor to allow the wealthy to buy elections (so much for one person, one vote) which violated two centuries of legal precedent (so much for principled conservatism and respect for stare decisis) in a political decision demonstrating contempt for the legislative and executive branches (so much for separation of powers and checks and balances).

America needs a national wave movement supporting a constitutional amendment to reverse the corruptions of democracy caused by Citizens United. This amendment would win majority support in every state and tidal wave support in most states.

Most recently Scalia compared being gay to being a murderer while gay-rights cases are pending before the court (so much for judicial impartiality and ethical standards of recusal).

Everyone concerned with justice and the rule of law in America should carefully read the reports about the state of the judiciary from the widely respected Alliance For Justice, which detail the large number of judicial vacancies that exist throughout the federal court system, the damage this does to our republic of laws, and the history of former presidents “packing the court” (my phrase) with younger “conservative” judges with views described above.

The Alliance for Justice reports are so detailed, comprehensive and invaluable they should be read by everyone, from the president to Congress and the media.

Progressives, moderates, centrists and principled conservatives should reassert the true original intent of the Founding Fathers who drafted the Constitution to reject the dead hand of the past, and who wrote the Federalist Papers to support ratification and warn America about dangers caused by the kind of factions that misrepresent their work today.

President Obama should instruct his advisers to consult with legal authorities and offer nominees to fill ALL federal judicial vacancies within 60 days.

Budowsky was an aide to former Sen. Lloyd Bentsen and Bill Alexander, then chief deputy majority whip of the House. He holds an LL.M. degree in international financial law from the London School of Economics. He can be read on The Hill’s Pundits Blog and reached at brentbbi@webtv.net.