Arizona - The Alamo Revisited In Tucson 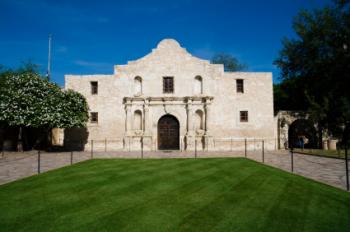 In a forum circa 1970, Dr. Ernesto Galarza, a renowned Chicano scholar, and one of the few that I don’t mind referring to with a title, when asked why we just don’t forget about the Alamo and the atrocities committed by groups such as the Texas Rangers, replied that it was necessary to know the past, warts and all, if only to fend off inane questions such as, “Well, the Italians made it, so did the Jews and the Irish, so what’s wrong with the Mexicans?” According to Galarza, working Mexican families have always struggled for justice. They don’t like being discriminated against and living in bad housing and attending bad schools.

History shows that they fought back! Galarza made the remarks in reference to his book Spiders in the House and Workers in the Field (1970) and the book he was writing “Alviso: The crisis of a barrio.” (1973). Galarza showed how the power of government in combination with agribusiness during the Di Giorgio Strike broke the strike. He related “Alviso” to this incident and pressed the urgency to save the Alviso community. “Without a community people lose their historical memory,” and history is rewritten to make it seem as if Mexicans are the problem.

This scenario is currently being acted out in Tucson where so-called custodians of public education are trying to erase Mexican American history. They have made it subversive for Mexicans and other minorities to know the past. According to them, learning about injustice contributes to un-Americanism, divided races and is unpatriotic. Ironically, it is Tucson and the state of Arizona that stand accused of segregation and offering Mexican Americans bad school.

Another irony is that every time the United States finds itself fighting a war, Hollywood drags out the “Alamo” to rally Americans around the flag in fighting the foreign invaders. The problem is that the “Alamo” is mostly fiction and its purpose is to hate Mexicans. That is un-American.

“Inside the Alamo: A Dispatch From Bexar County” San Antonio. The Texas Observer, January 26, 1990.

At a 20-year reunion of 1960s Chicano activists held in San Antonio in December, organizers assigned me the task of leading a tour of the Alamo. When I agreed, I thought the idea of the tour was a joke. So when it began to drizzle, on the day scheduled for the tour, I thought I had an excuse to cancel. But a number of participants expressed interest in the tour, and, as the hour approached, some three dozen families showed up to listen to the true story of how Mexicans won the Battle of the Alamo.

Contrary to popular myth, Mexicans were not the aggressors at the Alamo. Texas belonged to Mexico. Nor was the Alamo a defenseless mission. Like other missions of those times, the Alamo resembled a medieval castle, designed as a bastion of defense against those whom the missionaries considered infidels. Missions were usually built on high ground and their adobe walls were a good give feet thick. I painted this portrait for our tour-group, addressing myself to the children of the sixties activists, reminding them that the Mexicans on the outside were the true patriots, since, after all, it was they who were defending their nation’s integrity. Anglo-Americans inside the Alamo had arrived in Texas after 1821 (most after 1832), so it was highly improbable that many had been born in Texas.

From the beginning, I made it clear that I had no intention of disrespecting the filibusterers who had died inside the Alamo, but as a historian, I was required to point out that the Mexicans outside the walls of the Alamo had also died – a fact that is often forgotten. As I began to explain this point, three park rangers interrupted our tour and ordered us to leave the premises, advising us that only the “official” story of the Alamo was allowed. They also added that we were subject to arrest. With these words of encouragement, I proceeded with my narration, until the Alamo curator appeared and asked why we were there and, apparently, realizing the implications of censoring us, allowed us to proceed.

My lecture continued: beyond the belief that the Alamo was a defenseless mission, there were other myths, such as the character of the Anglo heroes of the Alamo. William Barrett Travis, for example, was reputedly a fugitive from justice, who, according to prominent scholars, never drew that line in the dirt and asked for volunteers to step across it and help buy time for good old Sam Houston. In fact, the Alamo was considered defensible, though its strategic value is another of many traditions invented by the good old white boys of Texas. Santa Ana should have bypassed the Alamo.

Jim Bowie was yet another myth. No doubt he was a ferocious fighter, whose knife could eviscerate an adversary. But he was also a slave trader; a man who sold other human beings for profit. Hardly the type of person you would want going out with your daughter.

The legend and myth of Davy Crockett also came under scrutiny. Illegal aliens, as I prefer to describe white Texans, generally portray Davy going down fighting. I have seen postcards depicting Mexicans swarming all over Davy – three Mexicans on his right arm, three on his left, and another half dozen on his legs. The unwritten epitaph is obvious: “Davy went down fighting like a tiger!” Crockett, in fact, surrendered and was tried and executed.

By this time we were ready for the tour of the Alamo building itself. A sign instructed us to remove our hats and remain quiet. Great care is taken by the Alamo’s caretakers to create a religious atmosphere.

Inside, I dwelled on the architectural features of the building and the grounds. And the contradiction between the myth and reality of the Alamo. General Antonio Lopez de Santa Ana’s inexperienced soldiers were, in fact, the underdogs, having less firepower and protection than Crockett and company. And like Panamanian General Manuel Noriega, Santa Ana was an easy man for Anglos to hate.

And then there was the encasement of the bones of some of the Anglo heroes. The irony of white Baptists and other religious fundamentalists